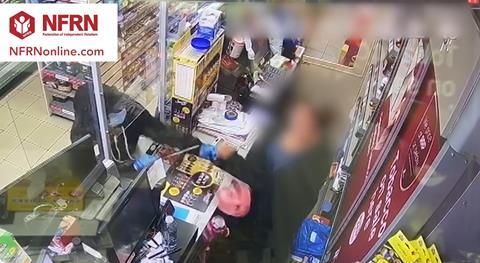 A terrifying knife attack by a masked assailant has left a retailer afraid to be alone in her store.

The incident took place at R N P News in Hatfield, Hertfordshire at 6.30am on 24 July, the first morning face masks became mandatory in shops.

CCTV footage released by the National Federation of Retail Newsagents showed a masked individual pull a knife on Rikki, the wife of the store owner Nilesh Patel, and demand she open the tills. The assailant stole £100 cash before leaving the shop.

Store owner Nilesh Patel said: “The hooded attacker entered the store with a mask on and dawdled around the shop for a moment, before approaching the till and attacking Rikki.

“She immediately held her hands up and opened the till.”

Nilesh explained as soon as the attacker fled the scene, a passer-by rushed into the store to aid Rikki after noticing the commotion.

“We’ve had a fantastic response from the police – they arrived straight away, immediately took a criminal profile and radioed the information to other officers,” Nilesh said.

The incident has left Rikki afraid to be in the shop on her own. “I always have to be with her now,” added Nilesh. “If I need to leave the store at some point during the day, one of my neighbours comes over until I’m back.”

Nilesh also raised concerns that face masks are putting shop workers in a vulnerable position as they are not able to identify a genuine customer.

“Usually, you are able to notice someone that is intentionally covering their face and ask them to remove their mask or show their face,” he said.

“Because of the new regulations you can’t tell who is genuine and who is not, so it’s far easier for criminals to go unnoticed.

“I understand that the government has made face masks compulsorily to protect everyone against Covid-19, but why now instead of when the virus was at its peak?”

Federation of Independent Retailers national president Stuart Reddish said: “Retailers face verbal and physical abuse on a daily basis, with attacks like that at Nilesh’s store being all too frequent.”

“It is unfortunate that the steps being taken to protect the local community during the coronavirus pandemic have also helped this criminal protect their identity when committing this appalling attack.

“The new face mask regulations in England and Scotland undoubtedly make it easier for attackers to commit crimes against retailers.

“Although the police responded fantastically to this incident, we are till urging for more police support.

“Criminals need to know that they will be stopped – regardless of the new face mask laws.”