Eight million suspected illicit cigarettes, destined for sale in Northern Ireland and beyond, have been seized during a Joint Agency Task Force operation in Co Armagh. 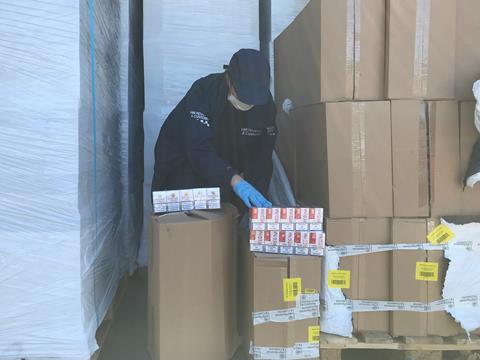 The raid on a property in Newry over the weekend demonstrated a common resolve to crack down on the illicit tobacco trade, despite the global pandemic, HMRC said.

The raid uncovered a large haul of suspect tobacco, thought to be worth an estimated £3m in lost duty and taxes.

A heavy goods vehicle and its refrigerated unit, a van and a fork lift truck were also seized along with approximately £12,000 and €2,000.

The operation led to a further eight searches across the border with almost €100,000 euros, thousands of duty stamps and approximately two and a half tonnes of hand rolling tobacco being confiscated.

HMRC fraud investigation service assistant director Steve Tracey said: “HMRC and our partner agencies are continuing to work together and are prepared to deploy where necessary to disrupt and dismantle the illicit trade of tobacco and other forms of criminality.

“Multi-agency investigations mounted by the Joint Agency Task Force show what can be achieved by our ongoing cross-jurisdictional cooperation to tackle criminality.

“Our collaboration, even during a global pandemic, demonstrates that we are committed to working with each other, at every level and in every location to tackle organised crime on a cross border basis.

“We will take all measures necessary to ensure we can continue to carry out this important work successfully.”