The Costa Express free drink campaign on Tuesday (1 October) produced mixed results for retailers contacted by C-Store, with one prominent store owner dismissing the scheme as a “total embarrassment” but others enjoying the extra store sales. 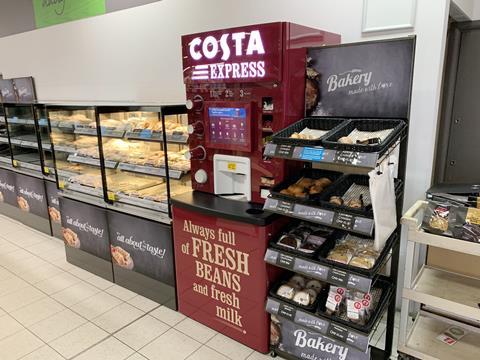 Earlier this week (Tuesday 1 October), consumers could claim a free cup of coffee, tea or hot chocolate from over 8,500 participating Costa Express machines nationwide, including partaking convenience stores and forecourts.

Retailers were provided with additional coffee and coffee cups, but provided their own milk as part of the agreement with Costa Express.

Richard Barron, who owns six Spar stores in around Chesterfield and recently won the prestigious Baldwin Cup at the Spar Retail Show, said the campaign was a “total embarrassment”.

“It was the biggest joke I’ve ever had in my life,” he said. “It cost me well over a thousand pounds, probably near £1,500. It was mayhem.

“The Tesco Express down the road from us just closed for the day, because the queue was going right across the forecourt. Another local village shop closed for the day too. We chose to keep going all day, but it was ridiculous.

“It wasn’t even the coffee that was the issue – it was the cost of milk. From using five or six two-litre bottles a day normally, to then going through 60-plus bottles in one day - that was the killer that simply wasn’t accounted for. We’ve got stores that used up well over 100 large bottles of milk.”

Berkshire-based Londis retailer, Arjan Mehr, said he could not enjoy the bustling of the store because his loyal regular customers were outnumbered.

“It was a manic day,” he said. “We saw a lot of people that we had never seen before. It began to get unmanageable at stages.

“We had a member of staff stood by the machine all day just to see us through. The only positive to take from it was that we got to give something back to our loyal, regular customers. The newcomers just grabbed their coffee and walked out.

“I am not particularly in favour of this type of marketing scheme, as I am not sure it has any value for the retailers. It is great business for Costa, but we didn’t have any conversion into additional sales. If anything, it just interfered with our regular customers.”

However, Suresh Arulananthan, owner of four c-stores in Kent, saw a significant increase in footfall and sales.

“It actually went really well for us,” he said. “We saw massively increased footfall and made a lot more sales as a result, so we were happy with the day. We haven’t heard anything from Costa since though unfortunately, but we sold more food, made more shop sales on that day compared to any day in the previous few weeks.

“It wasn’t just people grabbing a coffee and going. They stayed and bought something from the shop as a result of being in the store.”

Gareth Hooton, owner of Hooton’s in Golborne, Warrington, added: “We managed to cope quite well, considering the amount of people and a lot of customers abusing the system. Overall, it was a rather successful day. We had new consumers trying Costa drinks and it was a treat for our regulars.

“Our takings across the store were up a third as a result. If there is another one planned by Costa, we will be backing it. We provided the milk, which was our side of the agreement. Takings were up, which is great.”

A Costa Express spokesperson said: “We were delighted with the success of Costa Express’ Free Coffee Day and were overwhelmed by the fantastic comments from our customers who enjoyed their free drink. The days success was in part down to our fantastic partners, who we’ll be picking up with for their feedback in due course.”