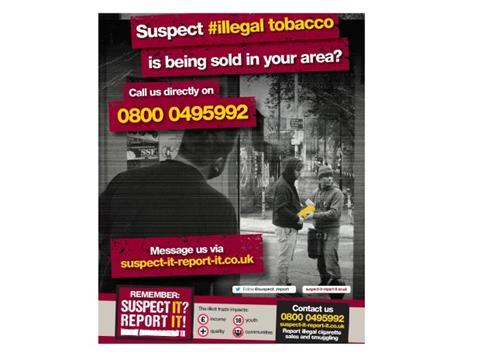 Imperial Tobacco has announced the launch of its own anti-illicit trade (AIT) hotline.

This hotline will allow anyone who suspects illicit tobacco activity to report it easily and anonymously.

The aim of the hotline is to allow information on illegal tobacco to be shared with relevant law enforcement authorities quickly and securely. In addition, the hotline will also be able to be used for legitimate products being sold to under 18s and single sales.

Imperial said the hotline built on its recent successes in the fight against illegal tobacco, including SARA, an AIT app it launched last year. So far, information gathered via SARA has contributed to 55 seizures, equating to approximately 1.4 million cigarettes and 274kg of tobacco, the company said.

Imperial’s anti-illicit trade manager, James Hall, said: “Trade in illegal tobacco undermines legitimate traders and starves the UK of tax revenue which could be used to fund our public services.

“Initiatives like SARA demonstrate that by revolutionising the way we process information from the trade and public alike we can continue to combat the vile illegal tobacco ‘industry’ and protect hard-working, honest retailers.

“We hope to build on this success with our new hotline and, as always, urge anybody with any suspicions to report them ASAP. Remember, if you Suspect it? then Report it! by calling 0800 0495992!”