The Co-op Group is considering expanding its same-day online delivery service to franchise stores “in the near future”, after confirming plans to roll out the service to 650 company-owned stores this year. 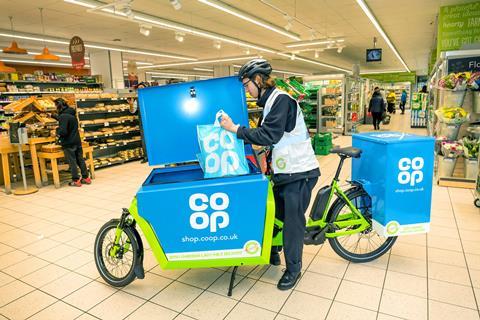 In January, Brighton, Bournemouth and Southampton will be among the first new cities to get the service, which is currently only available in London and Manchester.

The rollout over the next 12 months includes services from the Co-op’s own dedicated online shop, known as shop.coop.co.uk, which uses low-emission transport including eco-friendly bikes. By the end of the year same-day deliveries will be available in 650 stores in nearly 100 major towns and cities.

A Co-op spokeswoman said the group would like to offer the service to franchise stores “in the near future”, with additional back office work required to make it feasible.

The Co-op launched its franchise programme to independent Nisa and Costcutter retailers last year. Somerset retailer Richard Williams became the first Nisa member to convert his store to the Co-op franchise model towards the end of last year.

The Co-op will also expand its partnership with Deliveroo, which provides on-demand delivery of convenience grocery essentials in under 30 minutes.

Ordering through Deliveroo will be extended to 400 stores, reaching around 100 major towns and cities. Deliveroo will caters for customers who want a quick, impulse buy rather than scheduled same-day delivery, the Co-op said.