A new Bill that would give shop workers carrying out age-restricted sales the same safeguards afforded to emergency services carrying out their duties has been formally submitted to the Scottish Parliament. 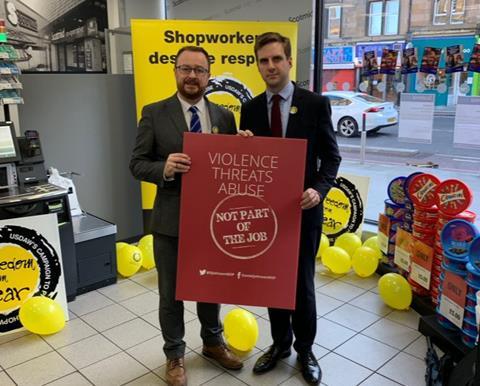 Daniel Johnson MSP has formally lodged his Private Members Bill to the Scottish Parliament, marking the beginning of the three-stage scrutiny process.

The Scottish Grocers Federation welcomed a “once-in-a-generation opportunity” to create a safer working environment for retailers.

If MSPs back the Protection of Workers Bill, it would create a separate offence and a statutory aggravation for the assault and impediment of a retail worker carrying out age-restricted sales. It would be similar in scope and rationale to the Emergency Workers (Scotland) Bill that safeguards staff of the emergency services in their duties.

Currently, workers dealing with age-restricted sales are personally liable for upholding the law, but do not receive the same level of protection as other professions, such as Police officers, Border staff and tax collectors.

After a lengthy consultation and with cross-party support, the Bill will now be scrutinised by one of the committees of the Scottish Parliament before a final vote by MSPs.

Johnson said: “I am delighted to see my bill formally lodged in the Scottish Parliament today, it marks the start of the process of parliamentary scrutiny and the prospect of bringing legal protection for retail workers that the growing evidence of violence and abuse makes clear is needed.

“Abuse and threatening behaviour should not be part of the job, and with the busy Christmas shopping season fast approaching it is now more important than ever that this is recognised.

“I believe this bill will secure the rights of all those who feel threatened at their place of work and will make it clear that such behaviour will not and should not be tolerated. Everyone has a right to feel safe at work wherever they work.”

SGF chief executive Pete Cheema said: “On behalf of the 5,000 convenience stores in Scotland we want to thank Daniel for his unwavering determination to get this Bill to Parliament.

“As we have said strongly and consistently: this represents a once-in-a-generation opportunity to create a safer environment for retailers, customers and communities. We will do everything we can to encourage MSPs to support the Bill. Whatever happens with the Bill we believe this marks a step-change in Scotland’s approach to retail crime.”