Mars Wrigley UK has announced the return of its Sweetstake promotion in partnership with the National Emergencies Trust (NET) for its Coronavirus Appeal. 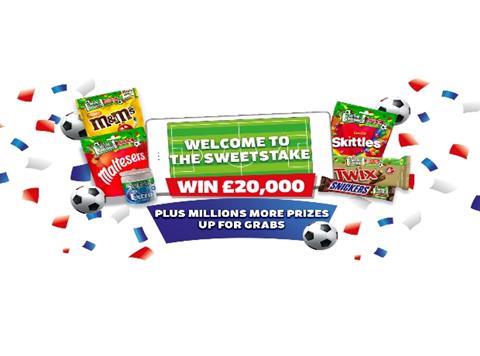 Promotional codes can be found inside a range of brand formats which consumers can register at www.thesweetstake.com for their chance to win, from today until the closing date of 11 January 2021.

Rather than the prize outcome being dependent on scenarios associated with live football matches, as was the case in previous promotion, which was in partnership with the England men’s football team, consumers will now be given two virtual football scenarios and an associated prize that can be won if the outcome of the virtual game matches the scenario given. The prize pool consists of £20,000, £1,000, £500, £20 and £5 cash prizes plus millions of free pack coupons which can be claimed when making an essential shopping trip.

Sweetstake winners will also be contributing to a fantastic charity, with Mars Wrigley UK adapting the promotion amid the current crisis and now making a donation that matches the value of every prize claimed to National Emergencies Trust (NET) in order to reach the target donation of £500,000. If the total matched value does not reach the target donation, Mars Wrigley UK will make up the shortfall.

Emily Owen, reward brand manager at Mars Wrigley UK said: “Sweetstake is anexciting promotion that we know consumers and retailers love. However, when we originally came up with the idea for Sweetstake 2020, we had very different plans. As a result of the Coronavirus outbreak, we made a number of changes to the promotion but still with the aim to give shoppers and retailers alike a fun and exciting promotion to engage with. By partnering with NET, the Sweetstake 2020 promotion will not only support retailers during this difficult time and excite consumers but will also fund organisations providing vital support to people affected by the Coronavirus outbreak.”

John Herriman, NET CEO, said: “We have been inspired over the past few weeks by the incredible levels of generosity aimed at helping those who are struggling most at this time of unprecedented crisis. We’re delighted that donations made through the Sweetstake 2020 promotion and Mars Wrigley UK will go towards the National Emergencies Trust Appeal to ensure we can quickly get support to those who need it most across the UK.”

Unlocking strong cross category opportunities for retailers to boost sales during essential shops in line with government advice, the promotion will further be supported by in store activation through POS and overlays, alongside social support