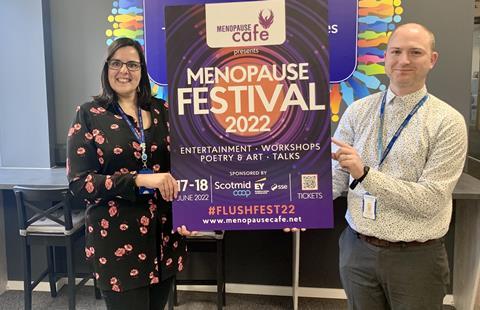 Scotmid has been announced as a prime sponsor of the world’s only Menopause Festival, #FlushFest2022, which will return in June.

Now in its fourth year, the festival has set out a packed programme of speakers and entertainment to continue driving open conversation about menopause amongst family and friends. The core aim of #FlushFest is to increase awareness of menopause around the world by changing attitudes, opening-up conversation and increasing knowledge, understanding and support of a stage of life which can have significant impacts for women.

TV presenter and journalist, Kirsty Wark, who featured in the BBC documentary ‘Menopause and Me’ will headline the festival as a keynote speaker and share her own experiences with attendees.

The Menopause Festival will host a comedy evening and will feature a leading line-up of speakers and workshop leaders alongside Kirsty Wark, including Haitham Hamoda, Consultant Gynaecologist and Chairman of the British Menopause Society. Workshops will focus on topics such as exercise, work, sex and mental health in menopause.

Shirley MacGillivray, head of membership and community at Scotmid, said: “We’re proud to sponsor #FlushFest22. We recognise the impact menopause has on the health and wellbeing of our employees and the communities that we serve. The event has a fantastic line-up, which we hope will increase knowledge and inspire those who attend to continue to the open conversation.”