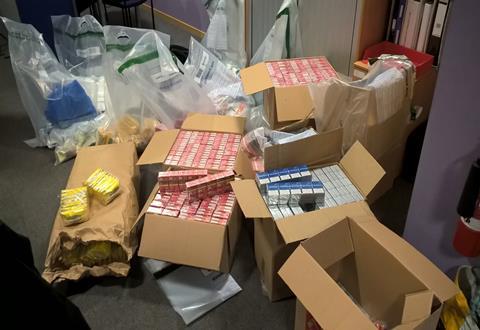 A retailer has been jailed for selling illicit tobacco in his store.

An investigation by Dudley Council’s Trading Standards in 2019 led to a case being brought against Ali Ibrahim Hamad of 107 Huntingdon Road, West Bromwich for the sale of illegal tobacco in his shop, Istanbul Mini Market, in Brierley Hill.

He pleaded guilty and was sentenced in April 2019 for offences under the Tobacco and Related Products Regulations 2016, Trade Marks Act 1994 and Money Laundering under the Proceeds of Crime Act 2002. The store owner had been given a suspended sentence of 18 months, 150 hours of unpaid work, ordered to pay costs of £5028.50 and a Confiscation Order of £58,923.09 was made.

However, after asking for an extension to the time to repay the money, he failed to attend an enforcement court hearing and the court issued a warrant for his arrest. According to Dudley Trading Standards, an investigation found that since the original court case and the confiscation order was made, the defendant had acquired an expensive vehicle.

He was eventually arrested and brought in front of Birmingham Magistrates on 17 June and ordered to serve a 181 day default sentence while the confiscation order currently stands at £65,905.45 due to interest accrued.

Councillor Nicolas Barlow, cabinet member responsible for trading standards, said: “This is case of someone thinking they can evade the legal process and fail to pay the consequences they have been given through a court of law.

“The defendant hasn’t helped his case by failing to come to hearings and not repaying the confiscation order.

“I’m pleased with the result of the most recent court action. This once again sends a clear message to anyone in the trade of illicit goods that we take these cases incredibly seriously and the legal process is there to bring them to justice. We continue to investigate other claims of illicit traders in our borough.”

According to Dudley Council, it has seized more than 20,000 fake cigarettes and 7.5 kilos of illegal tobacco in the last 12 months. It estimates that the value of the cigarettes and tobacco seized in the past year would be worth in excess of £45,000 if the products were genuine.