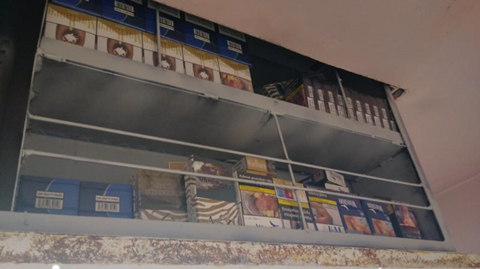 Two stores in Lincolnshire have been issued with Closure Orders following the discovery of illicit tobacco by Trading Standards officers.

The orders apply to ‘Bucharest’ and ‘King Power’, both in Boston, and require the shops to close immediately for three months after the stores were found to be used for criminal activity and caused a serious nuisance to members of the public.

Officers also found employees in the shops with no right to work in the UK. These were referred to Immigration Services. Vapes seized during the raids were found to be far in excess of the legal nicotine strength and well above the permitted size. One such vape contained the same nicotine content as 450 standard king size cigarettes.

In all five premises, the owners had taken extensive measures to hide their illegal products from officers, including false walls, false ceilings, false floors, hydraulic lifts, and electrically operated magnetic locks. In one case, chilli powder was even used around the products in an attempt to distract detection dogs.

The King Power shop had illegal cigarettes hidden behind a ceiling light, with a remote control used to lower the fixture to reveal the shelves of illicit products.

Lincolnshire Trading Standards are now pursuing orders against the other three premises and will fully investigate all criminal offences.

Andy Wright, Principal Trading Standards Officer, said: “I hope these two Closure Orders are the first of many. Trading Standards and the Police have responded to public concerns of lawlessness, particularly in the West Street area of Boston. That lawlessness is in no small part due to the criminal activity found in these shops.

“Make no mistake, these are not shops who trade a few dodgy fags on the side. These shops function for the primary purpose of selling illegal cigarettes and vapes.

“We applied for Closure Orders for the maximum permitted term – three months. Both hearings were contested by those running the business, but the court found there had been an extensive history of criminal behaviour and that behaviour was likely to continue. The court had little hesitation in applying closure for the maximum term available to it.

“We hope to work with shop landlords during the closure period to ensure tenants do not continue to commit criminal offences when the shops are allowed to re-open”.

Sgt Ian Cotton, from Lincolnshire Police, warned of the dangers of illicit tobacco. “These cigarettes are often unsafe,” he said. “The laundered profits contribute towards people trafficking and modern slavery. Good, honest people have been forced to close their business due to this activity and we will continue to work with our partners to combat the issue.”