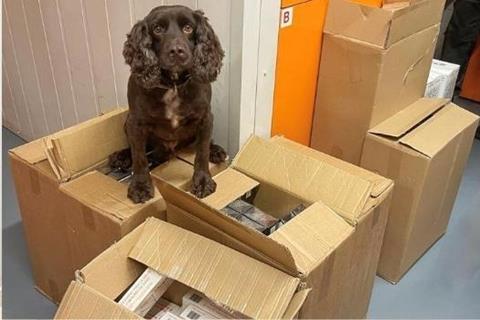 Croydon Council trading standards and HM Revenue and Customs have teamed up with specialist detection dogs to track down and seize illegal tobacco worth over £175,000 from a storage unit.

Officers recovered 270,600 illegal cigarettes and 14.8 kilograms of hand-rolling tobacco from a storage facility during the joint operation with BWY Canine Ltd on Tuesday 22 February.

Councillor Manju Shahul-Hameed, cabinet member for communities, safety and business recovery said: “The amount of illegal tobacco the team have seized since the end of September has been incredible. The operation is keeping our residents safe from illegal tobacco, which can be easier for children and young people to access and makes it harder for people to give up as the product is more affordable.

“Illegal tobacco often does not include correct health warnings and also supports the organised criminal gangs who smuggle the tobacco in and sell it on, which has deep links to modern-day slavery.”