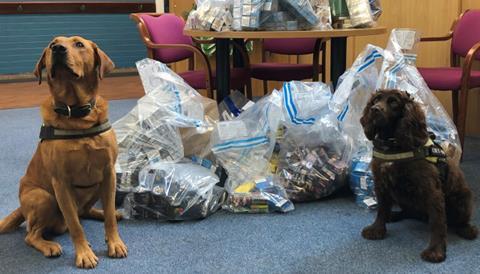 More than five million illegal cigarettes have been seized from local retail outlets in England and Wales in the first six months of the year.

The illicit products include more than 1,700kg of hand-rolled tobacco and 66kg of shisha. In total, more than £2.7m worth of illegal tobacco products have been taken off streets across England and Wales since January 2021.

The seizures took place as part of Operation CeCe, a joint initiative between National Trading Standards and HM Revenue and Customs (HMRC) to tackle the illegal tobacco trade.

HMRC director of fraud investigation service Simon York said: “Operation CeCe shows our determination to tackle the menace of illicit tobacco. This is a trade that costs the UK taxpayer around £2.3 billion a year, undermining our vital public services and bankrolling a host of other crimes that harm communities, including guns, drugs and human trafficking.

“Those involved readily undercut legitimate businesses and don’t care who they sell to, including children. HMRC and Trading Standards are determined to stamp out the illicit tobacco trade, as these results clearly show.”

As part of Operation CeCe earlier this month (October 2021), eight shops were visited in Darlington by Durham Police and two tobacco detection dogs, where they managed to seize over seven kilos of tobacco and 24,200 cigarettes.

Shaun Trevor led the operation on behalf of Darlington Trading Standards. “In one shop products had been concealed in a chimney breast and by a shelving unit. An electronic opening and closing mechanism would reveal the cigarettes,” he said. “In other shops, there were light fittings on magnets which when lowered revealed a ceiling void used to store these illegal goods.

“In total 24,200 cigarettes and 6.65 kilos of hand rolling tobacco were seized, further disrupting the illicit trade in the borough.”

HMRC encourages anyone with information about the illegal sale of tobacco to report it online or call the Fraud Hotline on 0800 788 887.