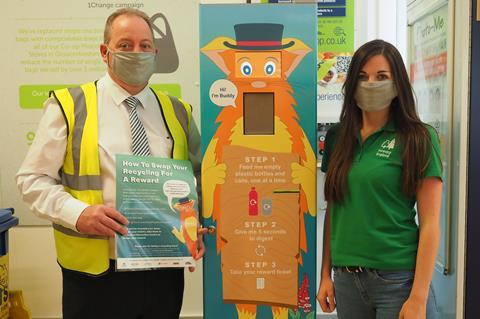 The Midcounties Co-operative has partnered with environmental charity Hubbub to install a new Recycle Reward Machine in its Your Co-op Food store in Coleford.

The machine is the first of its kind to be trialled in the Gloucester area and is designed to help reduce litter and boost recycling in the local community by incentivising people for their recycling efforts.

The machine gives out a ticket in return for every recycled can or bottle in-store, which Your Co-op members and customers can trade in at the Tourist Information Centre in Coleford and at the Dean Heritage Centre in exchange for a range of prizes – from tote bags and reusable water bottles to a lottery ticket for the chance to win up to £25,000.

The partnership between The Midcounties Co-operative and Hubbub is part of the #LoveYourForest campaign which was launched by Hubbub in 2016 to reduce litter in the Forest of Dean area.

More than 250 tonnes of rubbish is removed from the Forest of Dean area each year, costing local taxpayers £450,000.  The #LoveYourForest campaign was launched to tackle the issue, trialling a number of interventions which in four years has seen more than 800 bags of litter collected in the area. The campaign is run in collaboration with local employer Suntory Beverage & Food GB&I, Forest of Dean District Council, Forestry England, Foresters’ Forest, and Forest of Dean & Wye Valley Tourism.

Phil Ponsonby, chief executive at The Midcounties Co-operative, said: “Doing right by the people in our community and our planet is at the heart of everything we do, and we’re so pleased to be involved in this very exciting initiative.

“We’re committed to making change and encouraging our members and customers to work us with us to build a better environment for our future, and recycling is a big part of that.

“We’re hopeful that the new Recycle Reward Machine in our Coleford Food store will not only encourage more people to recycle their bottles and cans but help to keep our local communities free of litter too.”

Abigail Arden, project coordinator at Hubbub, said: “The new Recycle Reward Machines are an invaluable asset to help reduce litter in the Forest of Dean and what’s more, they put the area one step closer to creating a circular economy, by keeping litter out of the forest and in the loop. We look forward to seeing the response they get from locals and visitors alike.”

The partnership is one of many of The Midcounties Co-operative’s initiatives to help tackle the issue of single-use plastic as part of its 1Change campaign which aims to raise awareness of the issues caused by plastic pollution and encourage members and customers to make more sustainable choices to help reduce their impact on the environment.

In October last year, the Society announced that it will no longer sell single-use plastic carrier bags in any of its Food stores with them being replaced with fully compostable bags, helping to remove an estimated eight-million single-use plastic bags from circulation each year.