Whether it’s with a global corporation or a local producer, retailers are finding that sharing their space with other brands and businesses is driving footfall and growth 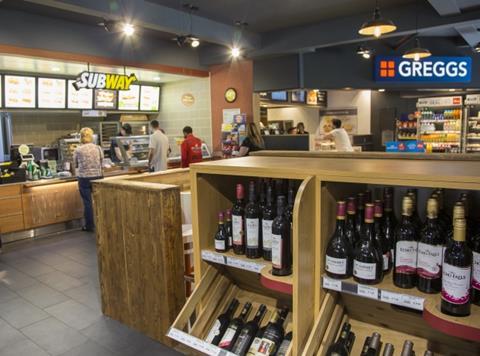 Convenience store retailers are increasingly embracing other brands in search of a point of difference. International brands such as Subway and Costa are becoming a common sight in c-stores and forecourts across the country, while a number of independent retailers are also accommodating small, artisan businesses in their stores to the benefit of both parties and the wider community. But there are various factors which determine whether a retailer unites with a big brand or a local business, and whether to franchise the brand or rent out the space to the ‘shop within a shop’. And in addition to the major food-to-go brands, what type of businesses are retailers looking to enter partnerships with?

Applegreen, the rapidly expanding forecourt operator with more than 50 forecourt sites in England, has struck up a fruitful partnership with Subway and Greggs, and is considering bringing Chopstix Noodle Bar to UK locations after brand owner Petrogas entered into a franchise agreement with the Chinese takeaway brand in Ireland earlier this year. Applegreen UK managing director Michael O’Loughlin says recognisable food -to-go brands are the logical choice for forecourt sites. “As car efficiency improves we might only see our customers once or twice a fortnight for fuel, and we don’t want to be vulnerable to the petrol price wars, so we need to give them a reason to come regularly, up to three times a day, and food to go is the future,” he explains.

Research from HIM Research & Consulting reveals that the strategy is working, with one in three shoppers surveyed at forecourts saying they were not buying fuel.

“The UK is all about brand,” O’Loughlin adds. “People know what they’re going to get with something like Subway and Costa and they want that consistency - plus our customers are transient so less locally connected.”

He adds that a franchise system works best with a multi-site forecourt operator such as Applegreen. “In some of our Irish businesses we have local business concessions, but for a group our size we need systems, and you want everyone working on the sites together, so we franchise.”

Of course, you can work with local shops without housing them in store. In Northern Ireland, Stuart Cordner, owner of Spar Comber Road in Dundonald (pictured centre), works closely with the local butcher to each other’s mutual benefit. “The butcher is located 400 yards down the road and I stock his products and heavily promote them in store,” Stuart says. “He is closed in the evenings and at weekends when I’m busiest, so people buy his products in my store. We promote each other.

“He can give me a service six days a week. There’s been a massive increase in trade at weekends and evenings. People come into both our businesses as a result.”

The butcher, Neil Fletcher, was sceptical when Stuart first suggested the idea to him, “but he soon realised it was to the benefit of both businesses and the local community”.

Starbucks is the latest global brand looking to enter franchise agreements with retailers. Speaking at the recent ACS Summit in Birmingham, Kris Engskov, president of Starbucks Europe, Middle East and Africa, said he would be keen to work with the “right partner with the right values”, and highlighted the increasing importance of coffee. “We can’t keep up with the rate at which people want to learn about coffee,” he added.

Nick Lloyd, managing director of Symonds Budgens, which owns a number of forecourt sites in the South West, rents the space to Subway in one of its stores, although he will do it differently next time. “We did it a long time ago when the focus was on your traditional c-store and we saw food to go and convenience as separate things, but the world has changed now,” he says. “Now we’d do it ourselves - our skills base is so much more robust. Costa has given us more confidence in food to go - and there’s more profit to be made in franchising the brand.”

The Gillett Group, which owns a number of Spar stores in the South West, has Subway franchises in its stores in North Hill, Plymouth and Bridport, Dorset. Peter Ewing, manager of the North Hill store, says the Subway franchise has been its “biggest success to date,” with turnover well exceeding Subway’s own predictions. Subway takes just 8.5% of the turnover, as well as an additional 4.5% for advertising, leaving the rest of the profits to the retailer. Gillett’s also rents the space to Subway at its Helston store, which it bought from independent retailer Chris Sharrinton. Phil Darch, operations manager at Gillett’s, says the financial rewards are greater with the franchises. “But it’s a steep learning curve - it’s all down to us. If you rent the space out you don’t have the risk.”

Vince Maloney’s Cook concession in his Budgens store in Ascot, Berkshire, consists of 14 freezers, turning over £6,500 a week. He essentially buys wholesale from the company at preferential margins, and receives marketing and till support from Cook to help maintain the standards associated with its standalone stores. Vince provides all the equipment and employs two dedicated members of staff, who are actually ex-Cook employees. “It’s helped the store a lot. In Ascot we’ve been hit hard by increased competition, so Cook draws people in and they buy a bottle of wine and Budgens products while they’re here,” he says. “Without Cook we probably wouldn’t be in growth so it’s added value to the business.”

Nick says he would accommodate local businesses, such as bakers, in Budgens Symonds stores if they had the space and more urban locations. “There is potential for a wonderful blend of mega brands and local brands,” he adds.

Scotmid Co-operative has provided a shop within a shop for eight different local bakers across its 200-store estate. The CRA-winning Stockbridge store in Edinburgh houses Breadwinner and Stuart’s bakeries, both of which complement each other with their product offering. Scotmid takes 35% of their margins and the associated uplift in footfall and store sales, while the bakeries gain an invaluable presence on the high street, free of the burdens of rent and business rates. “For the bakeries, it allows them to develop and spread their brand in areas where a standalone bakery might not survive,” says Stephen Brown, Scotmid head of local sourcing and differentiation. “It allows them to sell their products seven days a week, when a traditional baker closes in the afternoon. Modern shoppers want to shop in the evening and want products to be available all the time.”

For Scotmid, the benefits are multiple. “Having a concession gives us an opportunity to take the best of what’s on the high street and sell in a different way. Traditional products such as tobacco are under pressure, so it gives us something extra. It also brings us a big boost in footfall, so it’s a win win for both of us,” he says. Working with local businesses rather than national brands also caters for local tastes, which are rich and varied in Scotland, Stephen adds.

“Bakeries are very regionalised, so it suits us working with a variety of regional bakeries. For example, in Aberdeen you have the buttery morning bap, which was traditionally made for the ship industry; in Fife the well fired roll, which has a burnt appearance; in Glasgow the Glasgow roll; and in Inverness they eat the softie. Scotch pies also vary according to region. You also have to look at categories that do well in particular regions.”

Some retailers are engaging with businesses specialising in non-food categories. James Brundle, co-founder of Eat 17, rents out space to a local florist, Rebel Rebel, in his Spar Hackney store in east London. “For us it’s about getting people through the door, and it’s a point of difference,” James explains. “Flowers aren’t our strong point so we thought we’d leave it to Rebel Rebel. We want to be the best at different areas, but if there’s someone who does it better we’ll let them do it. It works both ways and it’s a really good way of giving small businesses a place on the high street if they can’t afford to have their own places. I think there’s a real future in it.”

Rachael Hockmeyer, owner of Hockmeyer Motors, which runs a Spar forecourt store in Sleaford, Lincolnshire, has introduced an outdoor 24-hour laundry service operated by Photo-Me. Customers can choose an £8 wash, a £4 wash or a £1 dry from the self-service Revolution laundry unit - and she takes a commission based on turnover. “It’s had a modest impact on profits, but it’s part of the package - you have to look at everything holistically as a convenience store retailer,” says Rachael.

“It works for us because people will do something while they wait for their washing, such as buy coffee or newspapers. There’s a big market for a laundry service like this in rural areas: about 50% use it for something related to pets or horses, where you need a bigger washing machine; the other 50% is people washing duvets and so on, or guest house owners who can wash all the sheets at once, and benefit from the industrial-sized tumble dryer.”

Rachael says people prefer visiting their service over the one in town because, unlike their competitor, they can offer parking so people don’t have to walk with a heavy load of washing. “Overall we’re making some money from it and gaining additional footfall. I’m not taking any risk with it. If it doesn’t work they can take it out. I’ve got no initial outlay,” she adds.

Benefits for both parties

Mairede Cureton, co-owner of Rebel Rebel florist in east London, was approached by Eat 17 to open a concession in its Spar Hackney store. “They came to us because they wanted something in the entrance to invite people in,” she says. “We already had a small shop in Broadway Market nearby, but the lease was coming up and we were worried we wouldn’t be able to afford the rent - especially on top of our workshop - so we closed it and moved in. The rent is cheaper and we don’t have to pay business rates.”

She says the business has come on leaps and bounds since. “It’s nice being in another shop, as sometimes people get intimidated going into a flower shop as they don’t know what to get. But they come in anyway to Spar, so we’re attracting a lot more people. We take all orders from there now.”

Mairede adds that the atmosphere in Spar Hackney was another key factor in its decision to relocate.