The move to cooking from scratch is boosting ethnic food sales, with consumers keen to give new flavours and cuisines a try at home.

Market analyst Mintel has confirmed there is a world war going on in the ethnic eats category as a growing number of global cuisines slug it out in-store.

There have been a few casualties along the way. Within the category, the value sales share for Chinese and Indian fell 2.5% and 3.6% respectively. The reason? More countries are joining the fray as fresh flavours - from spicy Caribbean drinks to street-food inspired Thai treats - come to battle it out for the nation’s taste-buds.

This renewed sense of excitement spells victory for the category as a whole with sales soaring 26% between 2009 and 2014 to top £1.4bn. And for c-store owners this struggle for dominance is certainly worth celebrating since shoppers are now, in theory, more willing than ever to try whatever exotic fare you can fit on the shelves.

Interestingly, the real growth in the sector has moved away from ethnic ready meals (which some customers still consider unhealthy and associate with the Horsegate scandal) towards products that can enhance scratch cooking.

This is down to the fact that more than a quarter (26%) of people in the UK buy raw ingredients with which to prepare world food-inspired dishes. Translated in c-store terms this means ‘meal-for-tonight’ is the mission that convenience stores can best capitalise on.

It’s certainly something that Susan Connolly, business development manager at the four-strong Connolly Spar group, has seen in her stores.

“I think that people want more exotic flavours in their evening meals and they want to make them from fresh ingredients,” she says.

“I’ve definitely seen that mission grow in the past couple of years: not necessarily ready meals, but more customers wanting something fresh and healthy and quick for tonight’s tea. They come in and want to grab the ingredients for something like a Thai mixed curry.”

Susan explains that in the past fresh hasn’t necessarily been the focus in her stores, but now she’s trying to make much more of it.

One way she’s achieving this shift is to work closely with suppliers to offer promotional items such as recipe cards with speedy and spicy meals for tonight alongside in-store sampling sessions to build excitement around the world food fixture.

“That’s something we’ve done with Blue Dragon, so it’s a chance for customers to try their dipping sauces with prawn crackers,” she says.

According to the stats this is a smart move. Meal accompaniments such as samosas, soy sauce and prawn crackers are growing 1.7% and 3.1% respectively (Mintel) - showcasing the fact that we can’t resist something a little exotic on the side.

Meanwhile, the category’s big players such as Amoy and Kikkoman have exploited this idea in the Asian food sector by repositioning their products as active ingredients rather than static table sauces - attempting to make them a bigger part of meal for tonight.

As well as injecting heat into meal-for-tonight mission, world food flavours are also making their presence felt in food to go, too.

“I think that people are in general looking for something different from standard food to go in c-stores - and that’s a gap that world food can fill,” says Max Jenvey from Oxxygen Marketing.

“Some customers are getting fed up with standard sandwiches and rolls and are looking for something healthier, something different and something fresh,” he says.

To meet this demand Jenvey has been working with Chopstick Express to offer shoppers a take-away-style meal with a healthy twist to grab at their local c-store.

“Basically, it’s an Oriental fusion offer with all the food prepared fresh,” explains Jenvey. “So it’s six versatile toppings with a choice of rice or noodles. We’re using ingredients like fresh broccoli, chillies and onions with the emphasis on ‘fresh’ and ‘healthier’ rather than necessarily ‘exotic’.”

The brand can install a kiosk-style offer into a 3x3 or 4x4 metre space with full training provided and after-care support given. All recipes are bespoke and fully mapped out on recipe cards to make them simple for staff to create.

Away from meal-for-tonight and food-to-go missions Susan has seen the potential for one rising world cuisine, which is normally considered quite close to home for us Brits: retro American.

“One of the things we’re introducing to the store, after seeing it work at the National Convenience Show, is American food,” she says.

“I think it’s very trendy at the minute so we’re investing in American food, often along the ‘snacking’ line, including things like Reese’s Pieces, Cheetos and sweet marshmallows for sharing; the American-style pancake mixes, too.”

All of which goes to show that there are many clever ways to cater for c-store customers’ world-straddling tastes. And, as Blake Gladman from HIM points out, it’s not just foodie tourists seeking something exotic either: it’s different ethnic groups looking for something traditional for their tea.

“If the store is in a high ethnic area, or their shopper base is diverse, then a strong ethnic range would be relevant to its shopper base,” he says.

Susan taps into this market by offering Polish meat and beer - which is a hit in her local community.

This cultural cross-over also means that as more cultures live together in the UK, people’s tastes are going to get increasingly experimental. After all, foods that are considered indescribably foreign to one generation are often shopping staples for the next.

“It’s definitely something that’s growing in this country, she says. “If you look back at what my nana and grandad used to eat, they wouldn’t even go out for an Indian! These days our generation eats what used to be called ‘foreign’ foods all the time.”

Table sauces are one of the smartest ways to buy into the world food category since, Mintel says, they’re brought regularly by 56% of consumers. And in this sector, according to Nyree Chambers, head of marketing for Grace Foods UK, some customers definitely like it hot. “We’ve found that consumer interest in hotter flavours continues to grow,” she says.

“Our Extra Hot Pepper Sauce remains our third best-selling flavour with value sales up 65.5% year on year, and we would expect this interest in hotter variants to continue.

“At the same time, we also recognise that milder sauces have great appeal, with our Sweet Mango Chilli flavour proving popular with families looking for a milder sauce.”

The new Levi Roots’ flavour in soft drinks, Jamaican Sunset, is available this summer with a £1 PMP to boost impulse sales. “The UK drinks market has experienced tremendous growth within exotic flavours, which has developed into a category in its own right,” explains Emma Hunt, Vimto UK and Levi Roots marketing manager.

While parents chow down on cuisine from all over the world, children have traditionally had to settle for much blander teatime fare. This is set to change with the launch of Mini Nom Noms, a kiddie-centric range of ready meals influenced by world foods. 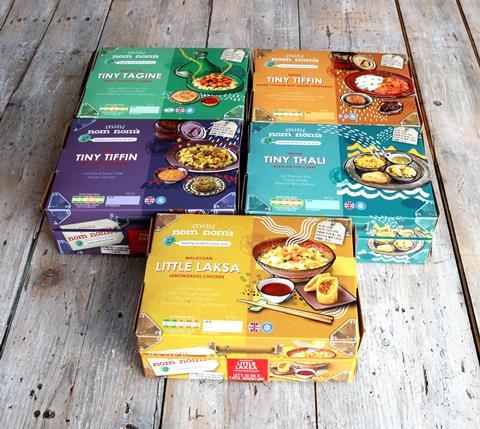 “While many of the children’s ready meals on the market take inspiration from European dishes, we know from trials that children love our range of Asian-inspired dishes,” says Lisa Sohanpal, co-founder of Mini Nom Nom’s.

Each of the meals in the range is inspired by a different region. So Two Tiny Tiffins (which incorporates Indian-style lamb and chicken) draws inspiration from North India, while the vegetarian Tiny Tagine is more Moroccan.

“The range also capitalises on its packaging to educate children about where the food comes from,” adds Sohanpal.

Fast food with an Asian kick

Asian food brand Tiger Tiger is looking to spice up the ambient lunch pot category with its new Noodles in No Time. Flavours such as Thai Green, Sweet & Sour and Sweet Chilli aim to add a new ethnic edge to the c-store lunch to go favourite.

All About Foods has been quick to recognise how keen we all are to reproduce the restaurant taste at home. Its portfolio spans Nando’s crisps and Peri Peri sauce, Wagamama stir-fry sauces and Wahaca chipotle chilli sauce. Watch out, too, for Masterchef oil and The Hairy Dieters cooking sauces.

Ramadan (18 June - 17 July) and Diwali (23 October) are both key times for stocking the kind of exotic fruit drinks that go down well with a celebration.

To help retailers make the most of each, Sunpride is offering special offers throughout both events.

“Sunpride offers special price reduction promotions through wholesalers to help retailers drive sales of Tropical and Mango flavours during Ramadan and Diwali, when sales of Sunpride rise substantially, in the case of Sunpride Tropical by as much as 80%,” says Refresco Gerber commercial director James Logan.

“Sales of Sunpride during the Diwali festival last year increased by 7% year on year across both mango and tropical flavours,” he adds.

“Demand is growing in the UK for exotic flavours when it comes to soft drinks. Rubicon, the UK’s No. 1 exotic juice drink brand and KA, the UK’s No. 1 Caribbean flavoured carbonate have led the way in the creation of a new exotic drinks category which has grown by an impressive 40% over the past two years. Rubicon accounts for one third of all exotic flavours sold in the UK and is growing ahead of the soft drinks category at 6%.”