Major illicit tobacco and cigarette seizure made in Grimsby 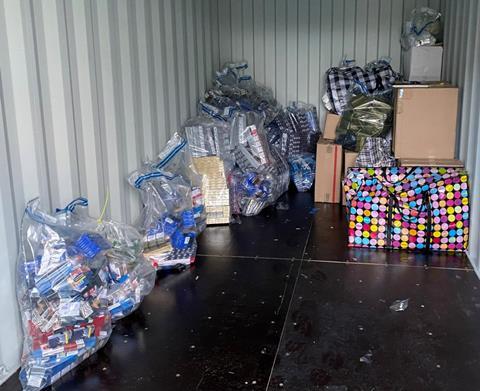 Almost 300,000 illicit cigarettes and 2,615 of illicit tobacco have been seized following a joint operation between North East Lincolnshire Council, Humberside Police and Humberside Fire and Rescue.

Trading Standards officers, along with a number of police officers, discovered the illicit products at a shop and a number of residential properties in the Freeman Street area of Grimsby, as well as in a car.

Four people were arrested and three cars were seized during the operation which took place on Tuesday 7 December.

The operation is part of the ongoing national anti-illicit tobacco drive, Operation CeCe.

Councillor Ron Shepherd, portfolio holder for safer and stronger communities, said: “Operation CeCe seeks to protect local communities from the harm that the illegal tobacco trade brings. Beyond the significant effects of tobacco on people’s health, the illicit tobacco trade is often part of other criminal activity including drug smuggling, people-trafficking and illegal alcohol and DVD production.

“The intended sale price of seized cigarettes is often less than half the cost of legal tobacco. This not only undermines work to reduce the number of people who smoke but also impacts legitimate businesses.

“This operation marks the first collaboration between national Trading Standards and HMRC, and I am delighted that the first six months have been hugely successful in removing a significant amount of illegal tobacco products off our streets and disrupting this illicit trade.”

Director of Fraud Investigation Service at HMRC, Simon York, said: “Operation CeCe shows our determination to tackle the menace of illicit tobacco. This is a trade that costs the UK taxpayer around £2.3 billion a year, undermining our vital public services and bankrolling a host of other crimes that harm communities, including guns, drugs and human trafficking.

“Those involved readily undercut legitimate businesses and don’t care who they sell to, including children. HMRC and Trading Standards are determined to stamp out the illicit tobacco trade, as these results clearly show.”

This follows an operation at a residential property in Healing where Trading Standards officers located and seized approximately 375,000 illicit cigarettes (over 18,500 packets) and 14.5 kilos of illicit tobacco (290 pouches).