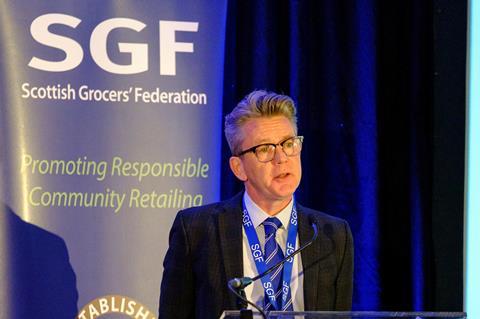 The Scottish Grocers Federation (SGF) has set out its presidential plan for the next three years.

The retail trade body has announced that Graham Watson BEM has been unanimously approved as its new Junior Vice-President.

Graham’s store was praised for being extremely close to its customers and playing a key role in supporting the community through the pandemic.

On his appointment, Graham Watson said: “I am honoured that my colleagues on the National Executive have shown such a high degree of confidence in me. Taking on this role is a bit of a daunting prospect but it is one which I am looking forward to immensely. The next few years will undoubtedly be amongst the most challenging our industry has ever faced and the crucial role SGF plays in supporting its members has never been more important. A key focus for me will be to help retailers connect with each other and to ensure convenience stores are genuinely at the heart of their communities.”

SGF CEO Dr Pete Cheema OBE added: “This appointment is a key part of our long-term succession planning and ensures continuity and stability at the very top of SGF. Graham’s experience and his passion for community retailing are huge assets to the Federation and I am delighted that the National Executive has made this appointment. Additionally, this new appointment means that the current Presidential Team is one of the strongest we have ever had and will ensure that SGF strengthens its leadership role across the industry.”