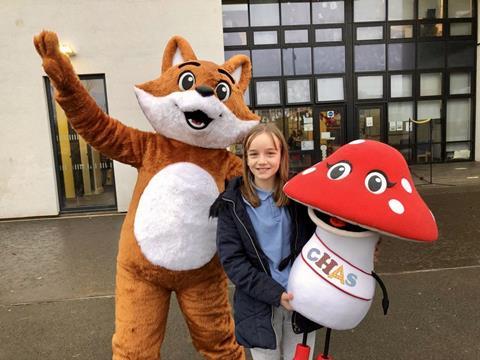 Primary school pupils Sophie Cairney (pictured above) and Peyton Gallagher (both 11) were given a Christmas surprise when a real-life version of their mascot designs paid them a visit on 20 December.

The pupils were winners of a competition run by Scotmid and its charity partner, Children’s Hospices Across Scotland (CHAS). 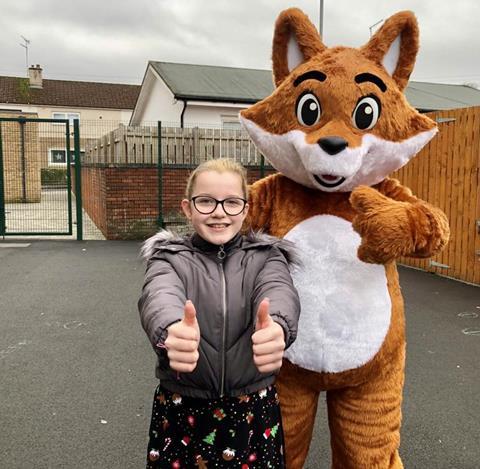 Peyton Gallagher with Cuthbert the Fox

The competition invited children to create a new character to become the face of Scotmid’s charity partnership, and, after receiving more than 2,000 entries, the decision was made to have two winners instead of just one.

Scotmid communities manager, Lynne Ogg said: “We were overwhelmed by the response to our competition. Picking just one mascot seemed impossible so we picked two to represent our charity partnership with CHAS! It was so exciting to surprise both Peyton and Sophie with their winning designs - we hope our mascots will continue to bring smiles to faces for years to come.”

Full-size Cuthbert the Fox and his three foot friend, Tildy the Toadstool, surprised the pupils at their schools.

“I was so excited when I saw Cuthbert in real life – it was such a great surprise! Even though I designed him, seeing him as a full size character was even better than I hoped. I hope he will make lots of other children as happy as he has made me!” said Peyton.

Sophie Cairney added: “I still can’t believe I was picked as one of the winners and coming face to face with Tildy as a giant cuddly toadstool was brilliant. I designed her using lots of bright colours and seeing her brought to life was really special. I think she makes a great sidekick to Cuthbert the Fox and I can’t wait to see them out and about next year!”

Peyton and Sophie each received an A3 framed print of their character, £200 of fundraising vouchers for their school, and a goody bag full of exclusive mascot merchandise.

CHAS has been offering a full family support service for children with life-threatening conditions for over 30 years. Nicky Bridges is the associate director of outreach: “­We were really impressed by Peyton and Sophie’s designs and we hope that the fun and friendly Cuthbert and Tildy will bring some joy to those we provide essential care to. We are extremely grateful to the huge efforts made by Scotmid and everyone who entered the competition to make this happen.”