Sales Assistant of the Year 2015: Meet the finalists

Meet this year’s contenders for the title Sales Assistant of the Year 2015. Our fab five show just how valuable super sales staff can be

The Sales Assistant 2015 category winners have been revealed and it’s an all-star cast. This year’s crop are some of the best yet, with each and every one of them making an awe-inspiring difference to their communities and stores.

Each of our category winners will be awarded £500 in prize money for reaching the finals, plus one night’s accommodation in London and £100 spending money. The overall winner of Sales Assistant of the Year 2015 will claim a further £500 on the final judging day.

Read on to discover more about our fab five who must now compete in one more round of judging at London’s Dorchester Hotel before the overall Sales Assistant of the Year 2015 is crowned.

Check out Convenience Store 20 November to see who will take the title.

Since joining the store part-time in 2009 and becoming full-time a couple of years ago, Ashley has taken on a number of crucial responsibilities which resulted in Donna and Bruce being able to take their first 10-day holiday in almost a decade this year.

A “constant grafter”, her shifts start at 5am when she opens the store and the recently-installed Post Office Local counter. She then prepares the tills and safe and cooks the hot food to go and bread in time for the morning rush.

From then on her day is filled with more multi-tasking, spanning ordering, merchandising and serving at the tills and post office counter, where she regularly receives positive customer endorsements in the form of ‘Wow’ messages.

In fact, she had just received another the day before Convenience Store visited, and is regularly brought chocolates and flowers by grateful customers. Donna is quick to credit Ashley’s winning customer service for how well the post office has been received by local people who, it’s fair to say, were apprehensive of the change at first.

One elderly man in the town will collect his pension only on the days when Ashley works and regularly brings letters and bills in for Ashley to explain, which she does gladly.

Local elderly customers also benefit from Ashley’s good nature in the form of home deliveries and prescription collections. On one recent home visit, Ashley found that the elderly lady had had a fall. She called an ambulance and waited with her until help arrived.

Training new recruits is another of her skills that Donna appreciates. “Ashley is basically like a mini me,” she says. “She’ll do things as I want them done, and most of the time even before I ask.”

Despite studying for a business studies BA at the Open University, Ashley still finds time for community work and is part of the local gala committee, where she helps to plan and publicise local events. However, her good-natured character aside, Ashley is no pushover and stands up to challenging customers, including underage shoppers, with poise.

He’s been in the job for only three years, yet Polish-born Michal is making a big impact on customer satisfaction and staff morale in his store and beyond.

Originally appointed as supervisor, Michal’s natural affinity with people, combined with a positive attitude and hard-working nature, has seen him given the new role of ‘Customer Service Champion’, and Michal now takes time away from the shop floor to train staff in his own store and the region’s other 22 sites in the ‘You are the Scotmid difference’ programme.

A real motivator, Michal takes care not to criticise poor staff performance, instead looking for ways to do things better and praising any positives.

Using insights gleaned from Alf Dunbar’s You Are The Difference customer service coaching programme, Michal has created spreadsheets which help him to assess customer service levels in stores and make improvements. His managers have been so impressed that they want to use the spreadsheets across the company.

The results have also been impressive. His own store has swiftly moved up the mystery shopper ranks and is now one of the best performing for customer service in the region, while the number of ‘Wows’ (positive customer feedback forms) that stores receive has risen across the board, with one having grown from zero to 26 in a week.

As a self-certified “foodie”, Michal has a real passion for local produce, and in particular the store’s Breadwinner artisan bread range. “Baked goods are an important part of Polish culture, and I am so proud of the delicious range that we offer that I always bring my friends and family to sample what’s available,” he laughs.

Customers aren’t left out, though, and when not busy motivating staff Michal can be found encouraging customers to try the baked beauties.

Despite all his new responsibilities, Michal’s favourite part of the job remains interacting with customers - particularly the elderly. “Customer service is an attitude, not a department,” he says.

From the outset, it’s clear to see why customers go out of their way to be served by Rema at Tesco’s Wembley Tube Express.

While her role is mainly till based, Rema’s influence is felt across the store and into the wider community. She regularly offers her own time to support shoppers and some even visited the store on judging day to sing her praises.

“The part of my job that I enjoy the most is interacting with my customers,” she says. “I know most of them well enough to have a proper conversation, but for those I don’t I’ll always make an effort to say something nice. This industry isn’t all about making money; sales assistants can make a real difference to people’s days.”

One of the countless examples of customer service relates to a blind customer, for whom she conducts a personal shopping service before helping her out of the store and across the car park. Unbeknown to the lady, Rema follows her at a discreet distance to be sure that she gets to her door safely. And Rema cuts short her breaks to make up the time.

Her ability to communicate in British Sign Language has also made her a hit with the local deaf community. Rema uses her skills to help them find everything they need, and the store is attracting a growing band of those with hearing loss as news of Rema has spread. “I’m incredibly pleased that such a small skill has brightened so many people’s outlook on the store and led to an increase in our customer diversity,” she says.

Rema is a firm favourite with her team-mates, too, regularly organising work nights out despite her hectic home life which sees her teach kickboxing, work with young people in the British Army Reserve Forces, and compete in the National Shotgun Competition (which she won).

Oh, and she can also drive a tank. 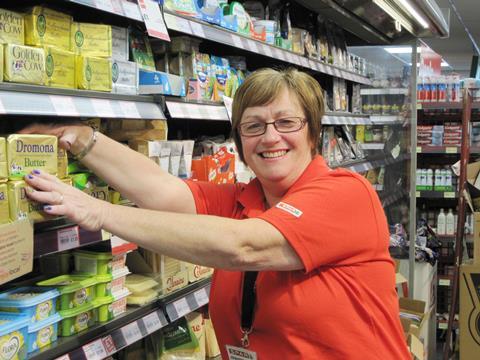 Full-time sales assistant Jennifer is a true all-rounder, offering noteworthy levels of customer service while also thinking up business-boosting ideas such as a fifth checkout, trolleys with baby seats and community events.

She’s also responsible for training new starters, no mean feat when you consider all the safety precautions associated with a busy forecourt site.

However, her main responsibility is serving at one of the busy forecourt store’s five tills - a role which she executes with relish. “I love it; it’s the first job I’ve ever had where I wake up in the morning looking forward to the day ahead,” she says.

She has built up solid relationships with many of the local customers - taking a special interest in local elderly people. In addition to regularly carrying out home deliveries she’s also become something of a paperwork guru, with many of her elderly customers bringing in confusing bills and letters for her to explain.

“One of the best things I can do for our elderly customers is give them my time,” she says. “For lots of them I am the only person they will speak to in the entire day. Five minutes of conversation can make a world of difference to a lonely person,” she says.

“If there’s a queue at the till I’ll ring the bell and call for someone else to jump on so I can give them that time,” she adds.

And it’s not just elderly people or locals who get the benefit of her TLC. About 25% of the store’s customer base is accounted for by passing trade from the nearby M1, which means it’s common for tourists to stop in, too.

On one occasion she put in many hours of unpaid overtime helping a family of American tourists find a hotel after they stumbled into the store hopelessly lost late one evening. After locating a hotel that could accommodate them she provided parents and children with warm drinks and a snack, before driving them to their hotel.

“Great customer service should be extended to all who enter our store. It’s those acts of kindness which help businesses so much,” she says.

And with almost 50 ‘good luck’ messages from customers posted on the store’s Facebook page prior to our judging visit, it’s clear shoppers agree.

This multi-tasking queen of customer service has management material stamped all over her. However, she continues to resist her superiors’ attempts to move her up the career ladder, preferring to stay close to the action and her beloved customers on the shop floor.

As a key holder Julie’s day begins at 3.45am when she arrives to open the store before setting up all the tills for the day.

Julie is also responsible for the store’s news category, including its daily newspaper deliveries. With 150 accounts, keeping on top of it is no easy task, yet thanks to Julie’s drive new accounts are being opened all the time. Earlier this year she helped design a flyer highlighting the service, which she distributed to local homes in her own time. It led to a boost in accounts along with a footfall and sales increase.

Her long list of responsibilities also includes training new starters, stocktaking and banking, but it’s the customers for whom she really gets out of bed in the morning.

“If I was a manager I’d be more office based, which wouldn’t be right for me. Customers are what make me tick,” she says. “I feel that in this role I can make a genuine difference to someone’s day, especially elderly customers, most of whom just want to come in for a chat.”

And if they can’t come to her she’ll go to them, regularly carrying out home deliveries.

For people she doesn’t know she always makes an effort to strike up a conversation. “I’ll complement customers on their clothes, perfume or nail polish, for example. I always try to make a positive personal observation. Little things like that make people warm to you and that makes all the difference.”

The community also gets a share of her caring personality. She recently donned gardening gloves to help build a veg plot for disadvantaged youths, and played a starring role in the store’s Halloween fair, sourcing and running games. All proceeds went to the NSPCC.

However, this “big softie” has no problem dealing with troublesome customers, including proxy purchasers, remaining calm and polite even when not shown the same courtesy.