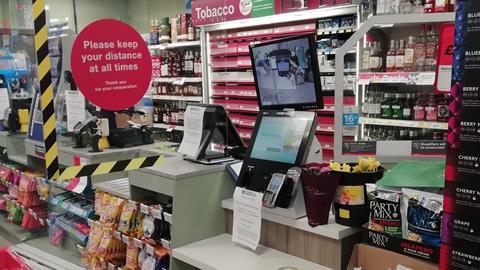 Is poor social distancing guidance keeping customers away from your store?

With government guidance on social distancing in place since March, the public has had time to get used to it and understand what it means for them.

However, this has meant they now know which stores are not adequately promoting social distancing, and are avoiding them.

A European study of shoppers by digital printing solutions provider Roland DG found that more than 40% of UK shoppers have stopped visiting stores that have unclear signage on social distancing.

The findings also indicated brands risk reputational damage from inadequate Covid-19 signage, with UK shoppers saying the number one emotional impact of poor signage is the feeling businesses are not taking their safety seriously enough (chosen by more than 40% of respondents). Signs are also in the spotlight more than ever before, with a majority of shoppers (75%) saying they are more aware of in-store signage than before the pandemic.

In the UK, the stores with the most unclear social distancing signage are clothes shops (chosen by 21 percent of respondents), followed by supermarkets and grocery stores (19 percent) and restaurants and bars (16 percent).

“Bricks-and-mortar retailers need to increase consumer footfall, and effective signage plays a vital role in giving shoppers the confidence to visit stores. But the data shows that most businesses are clearly not giving it enough attention. Stores that fail to prioritise Covid-19 signage will continue to see shoppers stay away,” said managing director of Roland DG UK Jerry Davies.

“There’s a big opportunity for brands to use signage to differentiate themselves and rebuild shopper confidence - and print businesses have a critical role to play in educating retail customers of the power of effective, directional signage. The print industry is pivotal in putting shoppers at ease, building trust and keeping everyone safe.”

In a recent survey, mystery shopping and market research experts Storecheckers found that the failure of retail staff to wear masks was preventing customers returning to shops.