Coca-Cola is to roll out a Premier League on-pack promotion called ‘Will Your Minute Win It?’ giving fans the chance to win thousands of football prizes and boost footfall into stores. 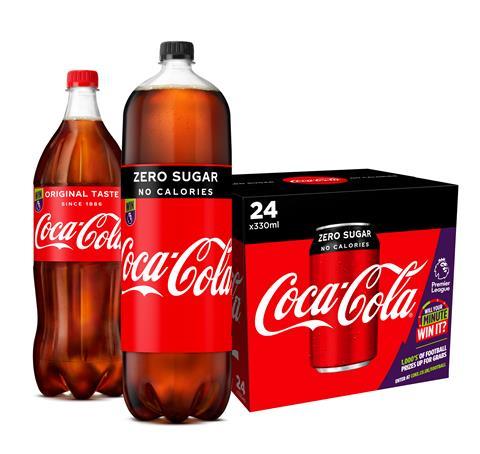 Launching across Coca-Cola original taste and Coca-Cola zero sugar, the promotion will also give shoppers the chance to win a weekly grand prize of playing a match “with a Premier League football legend.”

Rolling out from 17 February for eight weeks, the new promotion will feature on large take-home PET bottles and multipack cans of Coca-Cola original taste and zero sugar.

Each pack will include unique codes that fans can enter into the ‘Will Your Minute Win It?’ weekly competition.

After signing up to the promotional website they will be allocated a minute in an upcoming Sunday 4.30pm match, picking up a prize if a goal is scored during their time.

The promotional prize pool also includes thousands of guaranteed prizes such as stadium tours, match tickets, footballs, sports holdalls and NOW TV passes, as well as a weekly grand prize draw for the chance to win a VIP experience.

Winners who bag the VIP experience will have an exclusive opportunity to go head to head with a football legend followed by post-match drinks.

The on-pack promotion will be supported by a multimillion-pound marketing campaign and will help retailers drive sales of take-home packs “and meet the high demand for soft drinks during football events,” Coca-Cola European Partners GB said.

Vice president of commercial development Simon Harrison said: “The Premier League is the most popular league with a fan-base of 34 million in GB, and captures the imagination and excitement of the nation.

“The ‘Will Your Minute Win It?’ promotion is designed to fuel the hype for football fans by providing an additional thrill and chances to win great prizes, as well as drive sales for our customers by appealing to a large and diverse audience,” he added.