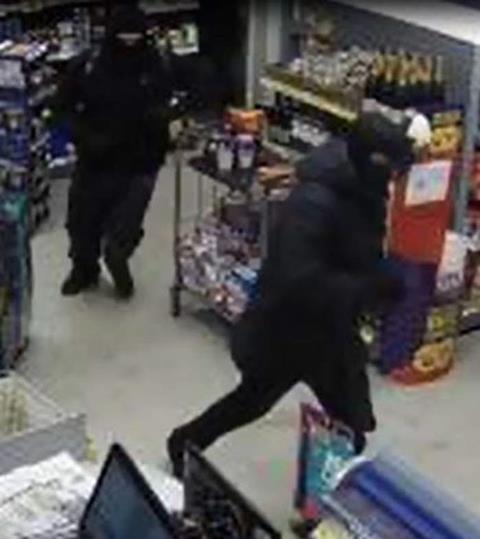 Police have released CCTV images of two men in connection with a violent knife-point armed robbery at a McColl’s store in Lancashire, where a staff member was punched in the face.

The incident happened at the convenience store on Barley Cop Lane in the city of Lancaster at around 9pm on 10 March.

According to Lancashire Constabulary, two men, one of which was brandishing a knife, entered the store demanding money.

The suspects made threats towards two members of staff, before punching one in the face and pushing the other. The two men made off with a significant amount of cash.

Lancaster CID detective constable, Paul Donnelly, said: “This was a nasty assault in which both members of staff on duty were threatened and assaulted. Both have been left extremely shaken by this incident and we are determined to find those responsible.

“We now ask people to study the CCTV images carefully and get in touch if they recognise either of the men, or recognise the backpack one of the men is seen carrying. We would also like to speak to anybody who saw anyone acting suspiciously in the area, or any residents who have CCTV footage taken at around 9pm on Sunday.”

The incident followed a number of recent violent armed robberies across the UK.

Anyone who has information that may assist the investigation is asked to call 01524 596448 or, if they get no answer 101, quoting log number 1317 of March 10th. Alternatively independent charity Crimestoppers can be reached anonymously on 0800 555 111.